The Legal Aid Council and Avocats Sans Frontieres France also known as Lawyers Without Borders held a Press Conference on the 4th December 2021. The Conference took place at the Council’s headquarters in Abuja. Representing the ASF were Ivan Panett, member of Board of Directors France HQ and Angela Uzoma Iwuchukwu, Country Director ASF Nigeria. Mr Aliyu Abubakar, Director General of the Legal Aid Council and some members of Management were present at the briefing.

Addressing journalists, the Director-General of the Council, Mr. Aliyu Abubakar expressed the Council’s readiness to offer free legal services to family members of victims of the EndSARS protest across the federation. He maintained that the organization was statutorily empowered to defend citizens whenever their rights are infringed upon.

However, the DG, while applauding the Lagos state EndSARS panel for its report, said it was too early for people to pre-empt the possible cause of action the Federal Government would take, especially as it relates to some of the recommendations that were referred to it for consideration.

He said the Federal Government should be commended for encouraging states where the EndSARS protests took place, to conduct independent investigations into alleged human rights abuses by security agents. 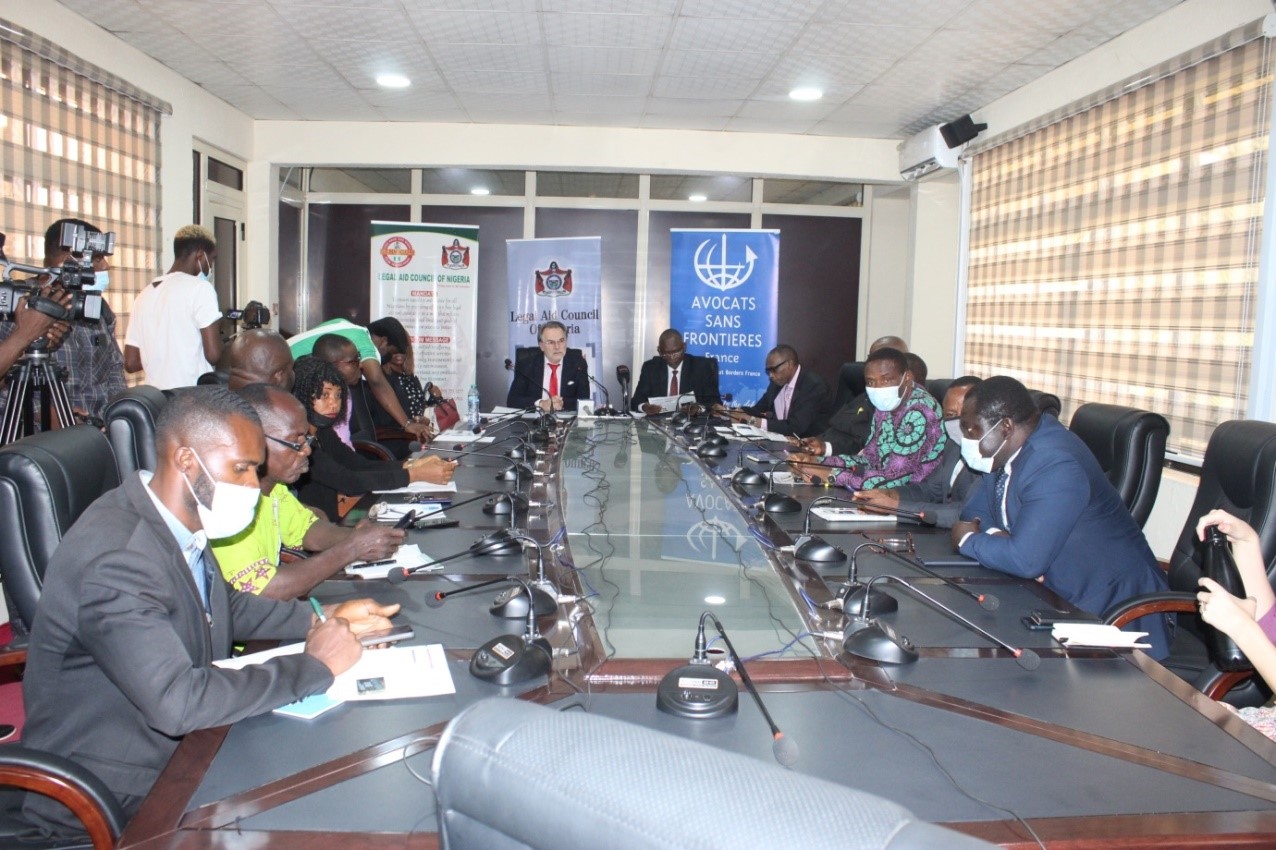 “As to what the Legal Aid Council can do, our power starts at level of where anybody’s right is being infringed upon. We have the power to defend or give the necessary legal advice and giving the necessary defence that is required for a defendant to be able to prosecute his matter in various courts of law.

On his part, Chairman of the Board of Directors of ASF France, Mr. Ivan Panett, said the organization was committed to developing new projects to protect victims of human right abuses in Nigeria.

He said the organization, in collaboration with critical stakeholders like the Nigerian Bar Association, NBA, regularly train both lawyers and security agents, especially on the issue of torture and need to strengthen the rule of law.

Likewise, the Country Director of ASF France in Nigeria, Mrs. Angela Uwandu Iwuchukwu, said the organization would support the prosecution of every security agents indicted by EndSARS panels.

“We also have been following closely the work of various panels that were set up following the EndSARS issue that occurred in the country.

“For us and our partners, it is important that those that have been found culpable, the police officers and others accused of committing acts of torture and brutalities against citizens by the panel’s report are prosecuted under the Anti-torture Act which was signed into law by the President in 2017.

“Indeed, it will be a good time, giving the celebration around the human rights day, for the President and the Attorney-General of the Federation to put action to ensure implementation and prosecution of those found liable by the panels,  using the Act”, she added.

The Director General had earlier received the delegation from ASF in his office. Mr Ivan Panett thanked the DG for receiving them and appreciated the Council for her cooperation through the years as the two organizations have been working together since 2007. The ASF has since been working with the Council’s State Offices.  Mr Panett said the ASF will continue to support the Council in areas such as training and the Police Duty Solicitor Scheme.