The Director General of the Legal Aid Council, Aliyu Bagudu Abubakar Esq. recently welcomed the representatives of the ICPC (Independent Corrupt Practices Commission) to the Council’s headquarters building for the inauguration and induction of the Anti-corruption and Transparency Unit (ACTU) of Legal Aid Council.

In his opening address, he expressed gratitude to God for granting everyone present the opportunity to witness another milestone in the history of the Council. Corruption, he said has been described as a cankerworm that has eaten deep into the fabric of our national and socio-economic life thus plunging the masses into poverty with all its negative consequences. This unfortunate trend has slowed the overall growth and development of the nation. He stated however that the establishment of the Independent Corrupt Practices and other related offences Commission (ICPC) as enshrined by the Anti-Corruption Act has gone a long way in making a difference in curbing the behaviour of the Nigerian populace especially officers in the public services, it was stated that further to the establishment of these agencies, previous administrations and particularly this administration has declared a zero-tolerance policy on corruption and has continued to work assiduously to eradicate the menace.

Based on the Federal Government’s directive that all MDAs should establish an Anti-corruption and transparency unit, the brainchild of the ICPC to checkmate corruption, the Council selected 8 staff from different departments and units as members of the unit for the inauguration. The D.G LACoN assured the ICPC representatives that the Legal Aid Council will strive to conduct its operations in accordance with the mandate of the ICPC.

In a goodwill message from the ICPC it was emphasized that the creation of ACTU’s in MDAs was initiated by the Independent Corrupt Practices and other Related Offences Commission (ICPC) in collaboration with the office of the Head of Civil Service of the Federation (OHCSF) in 2001 as part of its preventive mandates in monitoring, identifying and addressing lapses in the operational systems of government establishments especially where such systems promote corruption and unethical practices with a view to correcting them. The LACoN Anti-Corruption and Transparency Unit which is to be created is not a parallel authority to the management as it is expected to operate under the direct oversight of the Director–General. The unit is therefore expected to assist the management in promoting a transparent and accountable workforce by effectively discharging its duties which include conducting systemic study and review of processes and procedures, conducting continuous sensitization of staff on and against corruption, developing and implementing a Code of Ethics or Conduct for LACoN staff, monitoring budget implementation, to domesticate the ethics and integrity compliance scorecard and undertake preliminary investigations into complaints received amongst others.

At that point, an oath of office was administered to the Unit’s Chairman, Mrs. Cynthia Nwakeago Egwuasi, and members. They were encouraged to work hard and endeavor to stay on the path of integrity, be responsible and responsive in the exercise of their duties and avoid any oppressive act given the strategic role they are expected to play. 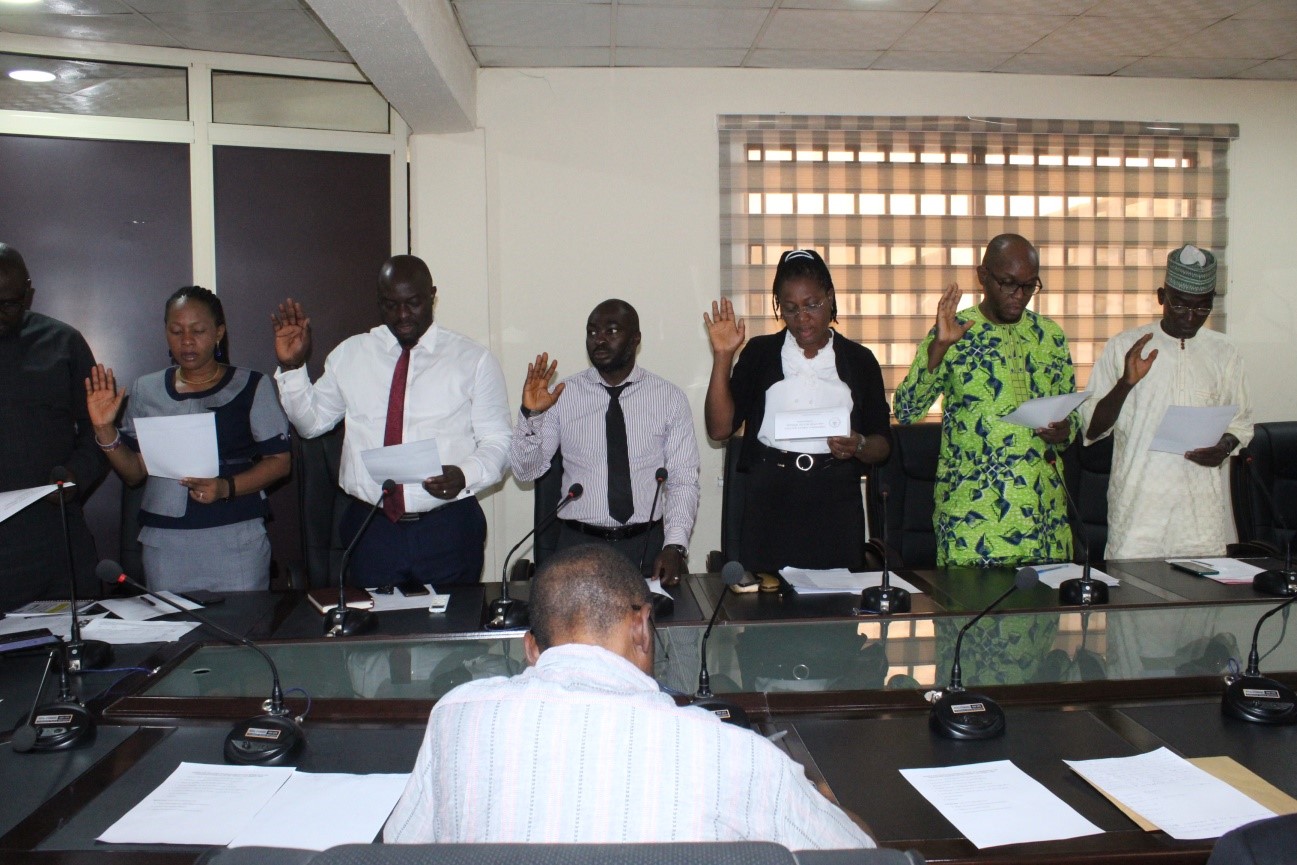 On the part of the LACoN management, the representatives of the ICPC implored the Director-General to adequately fund the activities of the unit as required vide the extant curricular issued by the Office of the Head of the Civil Service of the Federation and provisions of the Standing Order for the operations of ACTUS in MDAs 2014, as well as provide a conducive environment for the unit to function effectively.

In rounding up the activities, the Chairman, on behalf of the Committee, delivered an acceptance speech. In the speech, she thanked Management of the Council for the opportunity given to them to contribute to the realization of the core objectives of the ICPC, namely fighting corruption and eliminating corrupt practices in the public service.

She reminded all present that the vision of the LACoN is to build a Nigerian nation where there is equal access to justice for all irrespective of means and where all rights are respected, protected and defended which the Council strives to achieve with zero tolerance to corruption. She pledged their cooperation to the Commission to achieve the objectives of ACTU and also promised that the committee will discharge their duties diligently as required of them and that they will lead by example and not use their new positions to victimize anybody but rather, to work with the utmost integrity to eradicate corruption in the Legal Aid Council.